Cosmic mu-meson capture and decay measured with NaI(Tl), a vacuum PMT, and FemtoDAQ

FemtoDAQ can process any signals, including those from classic vacuum photomultipliers (PMT) which are often employed with NaI(Tl) crystals to detect ionizing radiation. In order to demonstrate this application we performed a "classic" cosmic ray experiment. 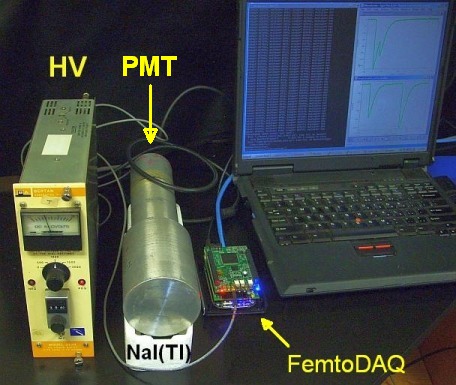 Figure NaI.1. Experimental setup with a NaI(Tl) detector connected to the FemtoDAQ.

We used a 3 by 4 inch NaI(Tl) crystal as an active volume for the mu-meson capture. The detector consisted of the crystal coupled to a vacuum phototube (PMT) enclosed in the metal pipe behind the NaI(Tl) crystal. We biased the tube with +1,200 volts from the HV supply and connected its output to one FemtoDAQ channel. FemtoDAQ was programmed to select double pulses in the ADC data stream. FemtoDAQ recorded 849 mu-meson decay events in its internal solid state storage during three days of running. Two such events are shown below. In both recorded waveforms the first pulse was generated when the mu-meson dissipated its kinetic energy in the crystal before it stopped. The second pulse was created by the electron emitted from the decay of the mu-meson. The "time interval" between the pulses reflects the life time of the mu-meson within the detector volume. 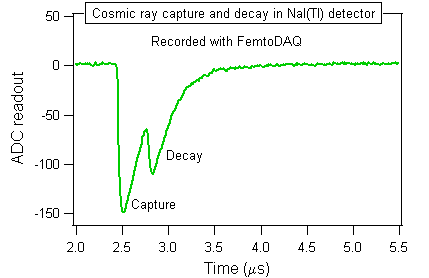 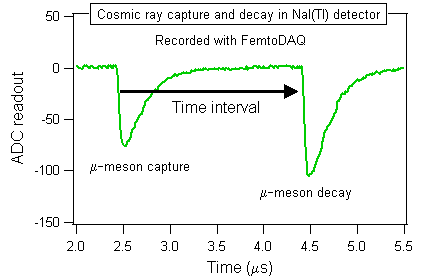 We processed the waveforms from the file and histogrammed the time intervals between the leading edges. The histogram clearly shows the expected decay pattern of the cosmic mu-meson. The exponential fit to the decay curve yielded a time constant tau = 1.9 microseconds, consistent with the literature value of 2.2 microseconds. The drop of the histogram towards zero below 0.6 microseconds was due to the difficulty of identifying the second pulse edge when it partly overlapped with the first one. Such superimposed pulses could not be identified by the real time edge detection algorithm. 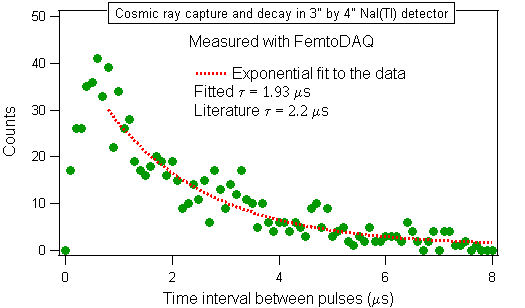 The detailed analysis of this data set was not possible because the NaI(Tl) crystal was internally cracked due to harsh treatment in the past. The pulse height information from this detector was not reliable due to internal damage. We will repeat this experiment when we get hold of an undamaged NaI(Tl) crystal.